Interview of the president of Alexander Innovation Zone

In recent years, Thessaloniki’s imprint on the global innovation map is becoming stronger and stronger. We estimate –along with the precariousness due to the lack of systematic reliable recording of relevant official indicators – that over the last three years about 1000 jobs have been created in innovative enterprises from foreign direct investment in the city.If one combines this fact with the parallel development of domestic start-up companies as well as scale up companies, comes to the conclusion that there is an undergoing peaceful revolution in Thessaloniki quietly and away from the spotlight that is creating a new working reality and unprecedented dynamics in its economy. This is first perceived by the entrepreneurs and the human resources managers of the technology companies in the city who are increasingly complaining lately that they cannot find available personnel. In other words, we are noticing a sector with negative unemployment when the total unemployment rates,both nationally and in Central Macedonia,have remained above 20% over ten years now. There are of course two other factors that contribute to this; many young scientists choose to work freelance or move to another country.

Even so, what is a given is that there is an atmosphere of optimism and creativity that is directly perceived by those who move to specific parts of the city where innovative enterprises are concentrated, mainly on the eastern side of the city, where the Thessaloniki Innovation Zone has been delimited. This is not incidental at all along with the fact that the boom in foreign direct investment in innovation businesses began to appear a year after the city’s branding initiative under the general title “Thessaloniki Innovation Friendly Destination”, which the Alexander Innovation Zone in cooperation with the Municipality and business and research institutions undertook. How do we convince them all to come here? Yes, we have a very good quality of human resources, but it is not enough, since it can be found elsewhere as well. Labor costs are indeed still competitive compared to other Western European and North American countries, but they are more competitive elsewhere.

What is there that cannot be found elsewhere? First of all, there is a wonderful environment to experience and I refer to both the climate and the community.The city is as big as it should be so you do not get bored and as small as it needs to be so as not to get lost, as much international as you need to be able to integrate, and as much as Greek to have colour. Secondly, our fellow citizens have a very good knowledge of foreign languages. This may sound insubstantial or self-evident, but it is extremely important, because it is scarce on an international scope. Thirdly, we have been successful in business innovations that impress when showcased especially in the niche market where we are world leaders, such as simulation software for the automotive industry or building materials. Finally, very important is the fact that there are Greeks everywhere, Greeks who grew up and / or studied in Thessaloniki,who are in positions of responsibility or co-decide development initiatives for the corporations they work for and who do not have to be convinced of our worth because they already know. This is the most direct and practical example I know of BrainDrain’s famous transformation into BrainGain. What do we have to do from now on to reinforce this trend of foreign and domestic investment already recorded? I think the answer is easy and obvious.

The first thing we need to do is to further strengthen our comparative advantages. For example, regarding the affair of the environment, we have worked out a plan in cooperation with the Municipalities of Thermi and Pylea – Chortiatis for the regeneration of the Thessaloniki Innovation Zone, which will make it comparable to the top international examples we have studied (mainly referred to BostonInnovationDistrict and Barcelona@22 which have been analysed in the strategic development of the Innovation Zone presented by AIZ last spring) and which we are expecting the Region of Central Macedonia to adopt. Another example is the initiative we have taken to develop the Agri-food Digital Innovation Hub in the first Pocket of Innovation of the Alexander Innovation Zone. The primary sector and its processing besides being the first priority in the region’s smart specialization strategy can be another area that we will excel at, since it has a tremendous potential for improvement by introducing innovation in its processes, productivity per acre, product quality and the selling price, among others.

The second thing we need to do is to build on the initial success and to continue with greater intensity and confidence. For this reason, the next initiative of the Alexander Innovation Zone will be called ‘‘Move toThessaloniki’’ through which we will invite the creative people of innovation to move to Thessaloniki where they will find work that will inspire them in an environment that encourages them. It is a point of reference that innovation is for the first time a central theme in the Thessaloniki International Fair (TIF) and that the honoured country is the US. All the available data show that with elementary moves to encourage entrepreneurship, as for example some of the main motives of the list we have processed and presented, we will witness an investment boom focusing on innovation in Thessaloniki in the coming years. I am convinced that we will be talking about this with enthusiasm in the next International Fairs of Thessaloniki to come. 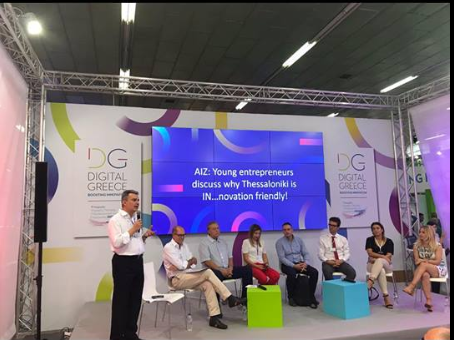